It sure did take way too long time, but I've finally managed to release Convos 1.00.

A new shiny tool for building webapps called Svelte had a major release in April, which fueled me with a new drive to give Convos a well deserved overhaul. Svelte changes everything by moving the heavy lifting from your browser to compile time — making web applications such as Convos more snappy than ever!

Svelte is truly a joy to work with. It's so much easier to predict when your code will use CPU and render time.

But enough with what made Convos more fun to develop. What is new for you, the user? You can see all the changes on GitHub, but here are some highlights:

The old sidebar was pretty nice for the simple cases, but it got very hard to understand which conversation you were in when you had multiple connections. The new design fixes this by using a more traditional tree-view design, where each conversation is grouped underneath its connection. 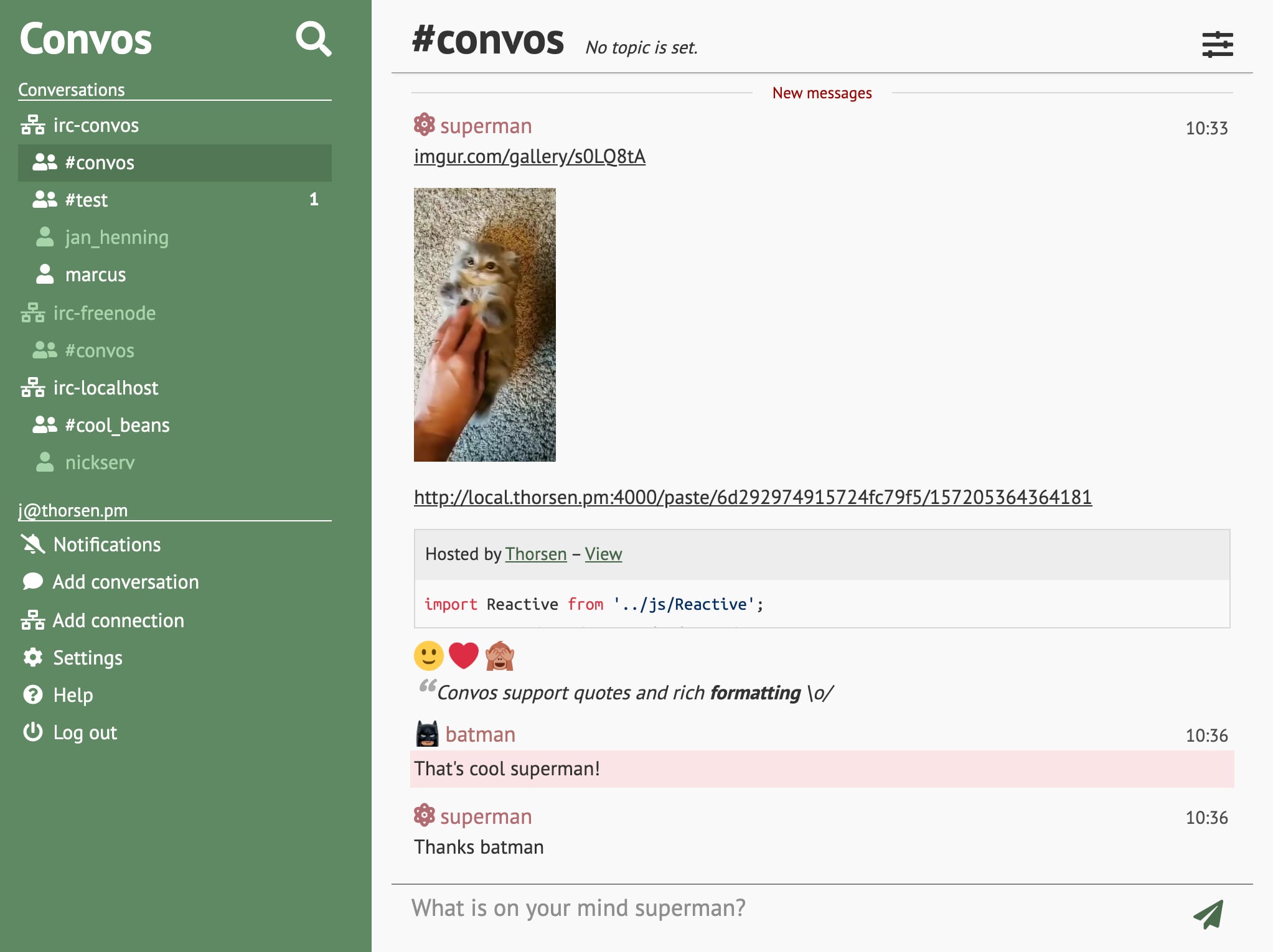 Icons and colors for nicks

Each nick has a custom icon and color. The icon and color is calculated from the actual nick, so it will be the same in each conversation and will not change.

A future version of Convos will also allow you to customize your own icon. Also if you are recognized as a developer, you will get your own icon which will be visible across all installations of Convos.

Fixes for Safari on iOS

Running Convos inside Safari on iOS has been very annoying the last year, because of some bugs related to fixed positioning set on elements such as the text field where you write your messages. All this have been fixed in 1.00, by using absolute positioning instead.

Before you had to create a connection during the registration process. This could be very confusing for new users, that are not familiar with how IRC works, but rather just wanted to chat. In 1.00, a new user will automatically get the default connection specified by the Convos admin.

The Help page now has information about rich formatting support and autocomplete. Check it out for new features and changes!

Nicks with mixed casing had many issues in the earlier versions of Convos. One of the worst issue was that users might appear offline, even if they were not. This is fixed in 1.00.

Features that have been removed

There is no longer any support for custom styling. This was removed when the CSS build tool was changed to Mojolicious::Plugin::Webpack. But do not fear — A future release of Convos will allow you to customize the theme and colors directly from your settings panel. Some presets might also be included, allowing you to change to Dark Mode!

The ShareDialog plugin was very buggy, and it also had a bunch of privacy issues. That is the reason why this plugin is no longer available.

The next releases in Convos should be covered in different milestones. Check out the 1.01 milestone for planned tasks.

Curious about Convos? Try out the demo or install Convos on your computer/server.